The word ‘saint’ is defined as “a person of exceptional holiness of life, virtue and benevolence” who is formally recognised by the Catholic Church. It is an honour that is extremely rare.

Heroes on the other hand are people of distinguished courage or ability, admired for their brave deeds and noble qualities. Both saints and heroes are considered as having  ideal traits and as role models to help others live a spiritual and noble life. Saints are heroes, but, of course, not all heroes are saints.

What is so special about saints and how does someone become a saint?

1.       To be a saint, an individual must have lived the life of a saint. And while some saints were once sinners themselves, all of them made significant life-changes when they joined the Church, repented and turned away from their unsatisfactory and sinful lives. All saints lived an exemplary, pious and most compassionate life and worked to serve God and make a positive difference to the lives of others. Being killed because a person refused to renounce their Catholic religious beliefs was another common way to become a saint (martyr).

2.       All  saints surrendered their lives in the cause of Christ’s message and ultimately “died in the Lord” (Revelation 14:13)

3.       Sainthood is a posthumous title and in fact, the canonisation process normally begins a minimum of five years after the person’s death.

4.       Saints perform at least two miracles – usually this comes in the form of healing an incurably ill, wounded or dying person or other inexplicable but benevolent phenomenon. Remember that it is really God performing these miracles through the person who is to become a saint. This requirement has been waived for a few saints, however.

An important point to remember is that Catholics do not pray to saints, they are praying to God through the saints as intermediaries. 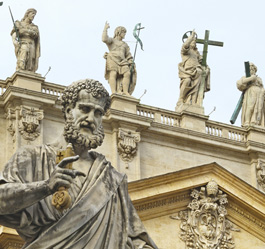