Pope Francis emerged as the leader of the Catholic Church at a very delicate time.  From his first appearance on the balcony of St Peter’s Basilica in Rome at 8.24pm on the evening of March 13, Pope Francis revealed that he was a man of humility and compassion, a man of the people and, of course, a man of God. Still shell-shocked from the sexual abuse pandemic, Catholics, the world over, were delighted with Francis’ election—it was a reason to be filled with hope, joy and pride.  So, what is it about Pope Francis that evokes so many questions?

Pope Francis has the utmost admiration for teachers and for the young. He thanked teachers on Twitter on June 3, 2014, saying “thank you to all teachers: educating is an important mission, which draws young people to what is good, beautiful and true.”

REmail this term aims to provide information and activities to help teachers in that important mission. It is hoped that if students spend some time getting to know Pope Francis and what he stands for, they will gain greater admiration for him and his role in the world and greater insight in to what he calls them to do. This way, it is hoped that students will feel, not only closer to Pope Francis, but also to their faith and the Church. 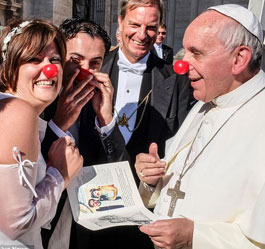